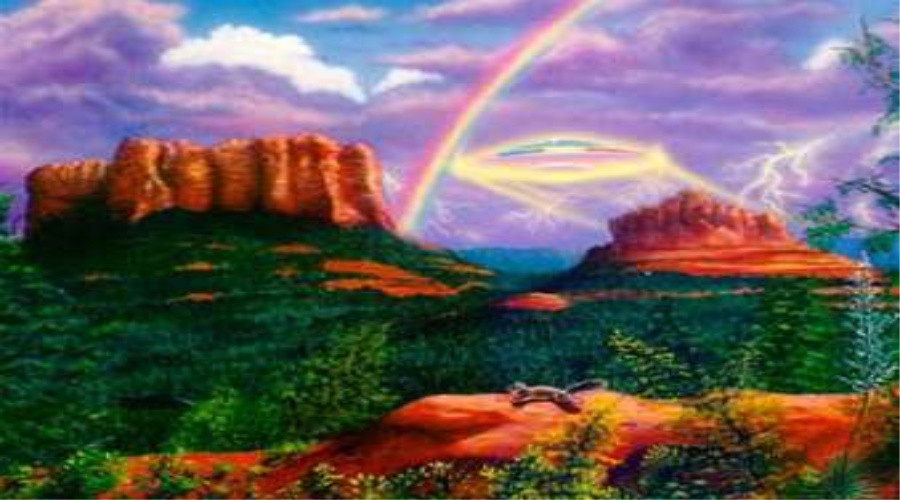 During the past week, the week of the Solstice, intense healing has been taking place for everyone on the planet. I am now seeing many people healed of their past traumas and sufferings. I communicated with the Galactics for this to happen on my trip to Sedona when I was there to open the Galactic portals for the Solstice. This is beautiful news and I have asked The 5 different races of Star Beings that I work with (The Advanced Interplanetary Council of Light ) that it continue and increase in intensity. You may experience this as spontaneously being healed from something in your past or healed of ongoing trauma or healing a current relationship.

Massive insights have been pouring in along with clear psychic sight happening for many. The Solstice itself was full of high energy and it has been that way for the past 5 days.

You may have felt overly hungry since the Solstice. This is the Solstice Energy coming in. It has lasted through today. I remember first reporting on this symptom of increased hunger back in 2012 when I had my NAE ( Near Ascension Experience ) this along with about 5 other extreme ( unknown at that time ) symptoms hit me in a huge way on that evening. These have since become staple Ascension symptoms since that time taking place when we are moving dimensions.

You many have also experienced increased energy, I literally felt like I was buzzing during the day before the solstice/the day of and a few days after.  It’s an incredible feeling when the energy is this high.

Right now many are experiencing throat issues as if the throat is raw. This has been going on with me for a few days now. The back issues many experienced have lessened but they come and go off and on. For instance I had not experienced back pain for a few weeks and now it is back.

Our cat had went missing 5 days before the Solstice. We finally found him on Solstice evening. The first 3 days we looked in all areas surrounding our house. I felt he was in one area that was furthest away from our house but still in our community. It seemed odd because he has never been lost before and the normal thought would be he will stay close to home, but I didn’t feel this as I drove around each day looking and calling for him. I looked into an area furthest away and felt his energy signature there, still walking each day or driving in this area to find him.  By the third day I knew he was getting hungry and extremely scared to be outside. I could feel this coming from him. I then worked to communicate with him telepathically calling to him through my third eye and showing him the way back, showing him every turn he would make. I got the answer back from him that he wanted to make his way back himself but was too scared,  ( his words) “I can’t do it, please find me.” I next talked to my other pets telepathically and told them to tell him to stay in the same spot I felt him in and we would find him. The night of the Solstice, I felt a good feeling about him, connecting to him. I felt a strong urgency to go and look for him that minute.. The minute I turned the corner to the spot I had thought he was, there he was. He looked at me in my car passing and we made eye contact. I went to him and took him to the car for a beautiful reunion with my other pets when we got back, pampering him like a king.

Note: I have found many lost pets and lost people in the past using psychic skills 🙂

Our Solstice Event on the 21st produced many other dimensional  experiences/healing experiences that the participants have shared with me:

Here are a few:

Feel like a new person.  Was able to do something that usually causes me anxiety, but felt very calm, relaxed and in a very good mood.  It was like there never was issue.
Thank you, Diane
C..M.

We had such a beautiful activation and similar star families in a couple of our journeys. I was able to visit my home planet that had been destroyed and rebuilt. It gave me some resolution and hope for what is unfolding for us! Thank you so very much for the space you held. So grateful for your presence.
H.W.

Hello Diane, the Soltice experience was wonderful. Thank you for doing this. The meditation was a great way to focus the mind and heart. I had a truly beautiful meditation, I saw my star family and they were huge, I mean huge I went to their galaxy and I was as tall as the black dot in their eye!! They wore white long gowns, big eyes and it was just so lovely. I felt a lot of peace during the transmission and the peace resonated so much into my cells that I became normal and it wasnt until after the 30mins had passed when I felt it’s ‘withdrawal’…

Thank you for the powerful Summer Solstice meditation 🙂
I have been feeling instant fatigue and sudden tiredness yesterday early evening (I’m based in UK) during middle of watching a video,
my third eye or pineal gland felt a pleasant pressure longer than usual like someone pressed their finger on my third eye.
Since taking part in Diane’s meditations last year it has contributed to me having contacts with my star families of Sirius.

A large lightship appeared for me when I was guided to go to the back porch during a kitchen smoking incident.

My buddy housemate cannot see it though when I pointed up the night sky to tell him. They allowed photos taken on my phone so I was very grateful and joyful despite what happened.

The number 11 seems to be significant as most dates on 11 seems full of lovely surprises including remembering dreamtimes clearly. I am recently also in contact with my beloved from Sirius A, a 6D being who has very recently came here in the physical with having to go down many levels with calibrating and balancing his physical body, the emotions and density felt and to overcome some fears in this low vibration planet with cultivating more stability with integrating the spiritual.
So much gratitude. Amen.
Blessings to All
K.

Thank you so much for this healing event. I have never felt so safe and supported. I felt so much love and received so much love. I went in and out of seeing on the ship and where I was from. The most important message I got from this experience is that I am not alone and I have all the love and support I need. Thank you
S.