I arrived in Sedona to open Portals at each vortex for my Galactic Event on June 21st the Solstice. These portals are Galactic portals that I open due to my contact with 5 different races of Aliens. My contact with Galactic Races happens IN PERSON, not through dreams, channeling, hypnosis or abductions. These races have appeared to me with each experience being totally different from the others. This has been ongoing for 20 years. I have pictures that were drawn for me of these 5 races I have not revealed to the public yet. I will when the Galactics tell me the public is ready, which I feel is coming soon.

While in Sedona, I went to the 4 major vortexes to open the Galactic portals and each one was a blessing for me to open.  Since I am highly linked to Galactic Energy and Sedona,  it was a highly charged experience for me.  I also added a 5th portal to match the galactic races that have visited me.

Each vortex represents a Galactic Race, which I will be revealing in my guided meditation Event on June 21st.

To open a portal takes a EXTREME amount of power, just like my healings do only in it’s own unique method and way. I merge with the energy of the sacred site the same way I am able to merge with clients in order to heal them.  I become One with the energy of the Sacred site in order to access its unique energy and then work with my team to open the portal in the middle of it and connecting to earth. I then create a portal opening and completely open the portal to shift the energy onto the Earth, which then merges into the Universe. This is done with my connection to the Creator, the Galactics and my team. 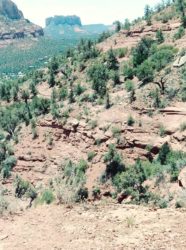 As many of you know I have a LONG history with Sedona going back to the early 2000’s when I lived here. I had a calling at that time to live there and I always heed my callings. I came for the energy back then knowing my consciousness would expand even further just by accessing the sacred energy.  I knew of High vibe locations and sacred places as far back as the 2000’s and have traveled to many of these locations to FEEL/MERGE/INTEGRATE and become ONE with the energy.  These are locations on earth with intersecting ley lines that hold strong energy and are vortexes within themselves, also having hot spots/vortexes of energy in that location.

When we came diving into Sedona from Phoenix after flying in, we saw our first rainbow of the day, as we got closer to the rainbow we were given a special galactic gift by being able to see the very beginning point of the rainbow and how it merged with the land. I have never seen this before in my life but always wanted to. It was thrilling to see the very starting point of the rainbow merging with land!  This was a very good omen of things to come and  welcome back sign for us.

As we drove further we saw 1 more rainbow around the bend and as we passed another bend/loop we saw another, that makes 3 in about a 15 minute period of time.  And as if this wasn’t enough, a few minutes later  we were blessed with a double rainbow to welcome us back. This was spectacular as we had just witnessed 3 rainbows while being able to see the beginning of the first rainbow and then a double rainbow as we ended our journey.

This also signifies, the 5 portals linked to the 5 alien races that have visited me, each with a unique experience that took place.

This was the Creator and Galactics communicating with me and welcoming me back to my previous home and where I had left my energy signature. 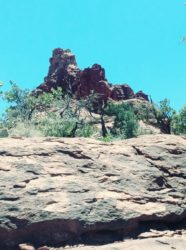 Each time I would go to the vortexes I would experience crown chakra activations. There were no geomagnetic storms going on at that time and they are the main reason that crown chakra activations occur in the past.  These went on the entire 10 days I was there. I was thrilled to experience these spontaneously. It is awesome for me to have physical signs of my presence in these sacred locations.

Time shifts happened while I was there opening up portals. A new reality has now been put in place for the rest of the year. You may notice this with loved ones acting different and things going smoother in  your life.  Manifestations are now happening easier. The energy has taken on a beautiful dreamy quality as we stepped into the higher dimensional planes. You may also notice a certain clear crispness to your mind being able to see beyond what others are saying. This has always been the case with me, but now its amplified again to a brand new level. I have brought this energy with me back home.

I saw spirits all over the house we were renting, lots of spirit activity in Sedona, its just most are unaware of it.

Sedona and other high energy locations are now turning into Divine Feminine energy/entities to prepare for the change over to the New Earth. The balance needs to be put back into the Earth to prepare for the change that is already taking place. As we know, the Divine Feminine that exists in everyone is now coming on line to front and center position. This will herald the New Earth in, so all can enjoy paradise.

Note: The picture I have used in almost an exact replica of the FIRST alien ship I was visited by in broad daylight in 2000. This is a mother Pleiadian ship. I will go into more detail on this when I reveal the Alien race pictures and the experiences that go along with them.

EXPERIENCE IS THE KEY TO EVOLVEMENT 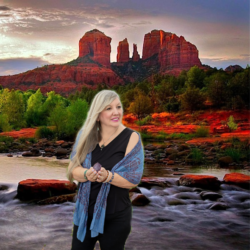 Diane Canfield is a Psychic Clairvoyant who also receives messages from those who have passed over. She is a Prophetic Visionary and Transformational Healer. She is a Psychic Life Coaching Catalyst for change, not only in peoples lives but in the building and creation of the New Earth as well. She assists and heals others through her clients sessions, articles, special events, and videos. As a Prophetic Visionary knowing information beyond this realm. She travels through many different realms at the same time. She lifts Humanity to higher levels of Consciousness through her extensive knowledge of the unseen and unknown.
Energy Update: Geomagnetic Storms and High Solar Wind Now In Progress
Energy Update: Continuous Flow Of Ascension Symptoms Happening Now